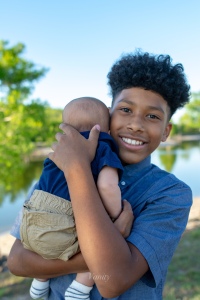 Most people will have one child with the game plan of having another once their first child is, let’s say between the age of 2-5 years old. I also know that most people plan their parenting chapter to be between the age of 24-30. Then there was me. I had my first child at the age of 16. Yes, I was a baby with a baby. I was changing diapers while wearing them, yes,yes, yes, I was one of those parents whom boarded the adult train like I knew exactly where I was going. I think the only pro of having a child at that age is being able to keep up with them as they grow older. I was constantly working more than one job in order to provide for him while keeping up with his daycare then school and so forth. It was very hard and I stripped myself of so much yet found the truest love I’ve ever felt. I knew he would be my first and my last.  Aiden is eleven now. He is the sweetest, most caring boy. Funny as heck and just too good for the world. His teachers and the school staff absolutely adore him, his friends always want to be around him and he is MVP on his football team. Parents, understand that I’m just feeling very proud right now as we all do when we see our child or children excelling (toot toot).

In June of 2017 life routed us in a new direction. Aiden would be promoted to be a big brother, Benny would be a dad for the first time and in some way, I would be too. Yep, that’s right. Eleven years down the road and I was laying another egg. It was absolutely terrifying. What was terrifying? Everything! How would I tell everyone? Did I want to tell anyone? Well of course I did, how would I explain the bump?  Can we really afford this? Who would the baby even look like?! Or worse, who would it act like?!?  We think of things like this. Notice I said WE cause you’re reading this and therefore that makes you involved. Don’t just leave me hanging now!

Fast forward through the 3 months of sickness which were absolutely hainous, backaches, overly emotional moments and 2 weeks overdue topped with anxiety every 5 minutes; February of 2018 Sebastian blessed us with his presence and today I can list 5 ways this 11 year age difference worked and why it was absolutely great for me.

Aiden doesn’t mind helping on his own. Early in the mornings, Sebastian will cry for his milk and Aiden will come in our room and say “I put the milk in the bottle warmer, want me to feed him?” Yes ladies and gents, he will do this on his own. All I’m saying is I’m happy he is one of those kids. He loves picking him up when he cries, he helps change diapers and even helps with bath time. It’s great!

I knew they would have each other. Seeing the way Sebastian would light up when he saw his big brother made my heart melt and seeing how Aiden would look at Sebastian made me feel like they would forever have each others back. Aiden knew he was an example to his brother and it made him feel like a superhero. Someone was watching him and would want to be like him. This also helped Aidens attitude towards a lot.  He felt like he carried a huge responsibility and he took pride in that.

This new journey was healing for me. It was like I was given a second chance. That gave me closure for so many things I had held on to in anger, like not being around for Aiden a much as I wanted since I had to work so many jobs to support him. This time I was able to take maternity leave and enjoy it. I was SUPER sick the first three months of my pregnancy so that was a different experience. Not an experience that I liked but hey, we can laugh about my exorcism days now. It really was a new beginning. I had the fear of a first time parent. I felt like I didn’t remember anything, like this was going to be so hard (the first month- THEE HARDEST) but I had a strong support group that reassured me it was like riding a bike. I would always hear that and think wtf. No! & well here I am now confirming it. Yup, it’s just like riding a bike. It all comes back to you as soon as you grab hold of it.

My sister and I are 12 years apart and she is one of my bestfriends. I would hope my kids would be exactly like that too. It was comforting  to know that my kids would have one another just like I have my brothers and sister.

Whether months or years apart in age, the diaper action stays the same. I believe that is one smell you’ll always remember without any bike metaphor. Good luck!